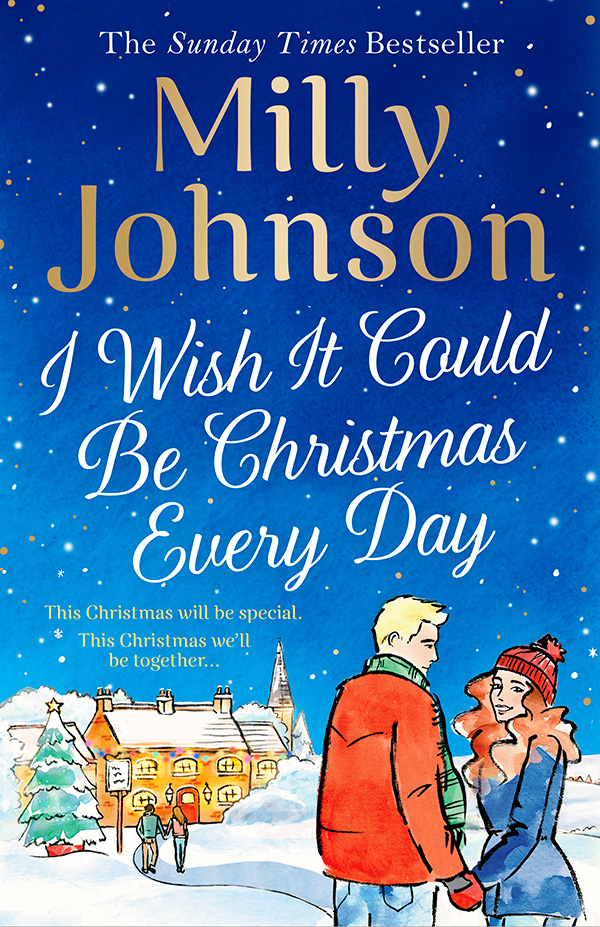 “An absolute joy. Like all of Milly’s books it’s packed with heart and humour and characters you fall in love with. I didn’t want it to end.” – Jane Fallon, bestselling author of Queen Bee.

Order I Wish it Could be Christmas Every Day from Amazon.

Six people all going to different places are forced to hole up in a small inn on the North Yorkshire Moors.

Bridge is meeting her soon to be ex-husband Luke to sign a piece of paper that will officially begin the end of their marriage. She wanted to see him for five minutes tops, because she can’t stand the sight of him. Or is she just afraid to be in his presence for any longer than that because what she feels isn’t the hate she pretends to have for him?

Luke is meeting his soon to be ex-wife Bridge for the shortest of meetings. He has moved on from his disastrous marriage to her and the last thing he needs is to be trapped with her for four full days when dangerous old feelings could resurface.

Industry boss Jack is on his way to a meeting with a Japanese client who cancels at the last minute. It’s a dratted inconvenience having to spend Christmas with a bunch of strangers. But is it really – for someone who is lonely and craving company?

Mary has been in love with her boss Jack for four years and this was her big chance to show him she was flesh and blood not the mere useful equivalent of an office stapler. Now she has four days to show him that he needs her in his personal life… but has that chance come too late?

Charlie and Robin are going to Aviemore for a snow-filled, luxury Christmas with all the bells and whistles they can muster. Having to spend it with a group of strangers instead, cooking their own dinner would be a complete and disastrous let down to them… wouldn’t it?

Six people – some at peace with themselves, some work in progresses, some lost… all take and give from each other in this festive fun-filled feast.  A story packed with broccoli, snowmen, carols, paper chains, mince pies, plum tomatoes and cherries… kindness, wisdom and above all hope.

This book is a little different to the others I’ve written in that it’s got a very stripped back cast and just the one major setting – the lounge of an old inn.  Had I written it at any other time, it wouldn’t be the book it is and I’m so glad for that. I had the title years before the story – I imagined it would be a sort of magical land that springs up where it really is Christmas every day.

I was so behind with it as last year I was caring for my dad a lot and when he died last Christmas, I badly needed somewhere to put a lot of my emotion… and (just before you think this is pointing to misery) I badly needed cheering up. So I wrote the deepest yet most emotional and heartwarming book I could because that’s what I needed to read myself. It took me two and a half weeks to write  the first draft from scratch – it poured out of me. And I almost felt as if I were just reporting what the characters were doing – ie they were telling me what was going to happen, not the other way round. Yes that’s weird I know, but that’s how it was. I stuffed it full of the best of Christmas and also with a new-found philosophy that we should enjoy the here and now more, see the flowers at our feet rather than be continually staring into the horizon with binoculars.

Had I written this book a couple of months later – I would have avoided six people being trapped together like the plague (excuse the pun) but it was far too complete for me to change it by then.  This book is about the best sort of lockdown.  And I sincerely want it to give readers the same joy that I had in writing it and some well-needed escapism.

Praise for I Wish It Could Be Christmas Every Day

‘An absolute joy. Like all of Milly’s books it’s packed with heart and humour and characters you fall in love with. I didn’t want it to end.’
– Jane Fallon, bestselling author of Queen Bee.