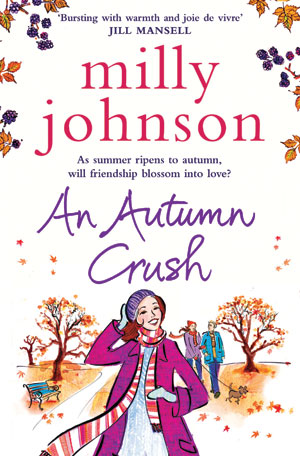 “This book is packed full of warm and energetic characters. Guy melted my heart – the perfect gentlemen. I often found myself holding my breath, waiting for something to happen and Johnson does make you wait. She builds up the anticipation perfectly, so that when things start to come together, they do so perfectly. And boy, is it worth waiting for. There are plenty of unexpected twists and turns along the way, but these will lead you to a seriously satisfying ending.”

An Autumn Crush is available from Amazon.

After a bruising divorce, headstrong Juliet Miller invests in a flat and advertises for a flatmate, little believing that in her late thirties she’ll find anyone suitable.

But along comes self-employed copywriter Floz, raw from her own relationship split, and the two woman hit it off. And when Juliet’s twin brother Guy meets Floz, he is overcome with a massive crush. But being a shy, gentle giant, he communicates so clumsily with her as to give her the opposite impression.

Guy’s best friend Steve has always had a secret, unrequited crush on Juliet. After a night of too much wine, Steve and Juliet end up in bed, after moaning about the lack of sex in their lives. Convinced that Juliet doesn’t feel the same way, Steve agrees to a ‘just-sex’ relationship, until they can both find other partners.

Floz has never had much love in her life and is obviously thirsty for affection. She loves the whole Miller family, from Juliet and Guy’s warm, loving parents, to their ancient one-eyed black cat. But can Guy turn Floz’s affection for his family into something more – into love for him?

All my dad’s friends were wrestlers in the ‘golden era’ of TV wrestling.  But that’s only a fraction of the story because the ones who didn’t go on the TV were the ones who made far more money, filled stadiums in the world that the Beatles couldn’t fill and had people walking for four days in India in order to watch them.  My grandad was a part-time wrestler too.  He fought Les Kellett and a ruthless wrestler by the name of Bert Assirati tried to get grandad to fight him – but Bert was notorious for bloodlust and no one would fight him, because they’d be off work for weeks later.  The old wrestlers have amazing stories to tell and about the men they worked with: For instance Sky High Lee, whose party trick was having women throwing darts at his back  (mind you he did drink a bottle of whisky for breakfast which might have helped with anaesthetic lessons). All dad’s pals were trained by Brian Glover’s father Charlie – whose influence was massive.  I did research so much with the intention of writing a book of anecdotes, but life just got too busy.  So I paid homage to the sport in this book.  It died over here – but remains massive in the states and I’ve been lucky enough to mingle with the WWE lot (research, but someone has to do it).  Yep – I’ve cuddled CM Punk, folks!

Plus I also wanted to pay homage to the wonderful world of writing greetings card copy – a job I did for many years.  I was right in the at the beginning of the humour book, when Purple Ronnie was just starting off and I did some ghost-writing on that before it even hit the shelves.

And there’s just something about a chef…

Originally this book was called ‘Just Judd’.  But Judd because Guy and we set the action in Autumn.  Whilst writing it – in Autumn – I really opened up my eyes to the season and saw how very beautiful it was.  But I was struggling at first to find how to write the book as it was too depressing.  Then I went to a Mother’s Union meeting to do a talk and a member was mentioned in the minutes.  She’d had to cancel her charity sky-dive through high winds.  The lady was in her seventies.  I had a flashbulb moment again.  ‘This lady isn’t saying I’m in the winter of my life, she’s gone back round to Spring again!’ I thought.  The message of the book was born… Autumn isn’t a season of dying,  because the year is cyclical.  Just when you think all hope has died – hang on.  Because it might just be resting and be ready to spring into bud again shortly!

Praise for An Autumn Crush

“She specialises in funny storylines where nothing is as it appears and friendship is just as important as the romance.”
– Chicklit Club

“Milly Johnson has written another book that had me laughing out loud and also crying at different times as I was totally immersed in the stories.”
– Carol Ravensdale

“Can never think of anything poor about Milly Johnson’s books. Her writing flows so easy that you don’t have problems keeping up with who is doing what with whom and having to flip back pages, like I sometimes find myself doing with other authors.”
– Toffeebabe