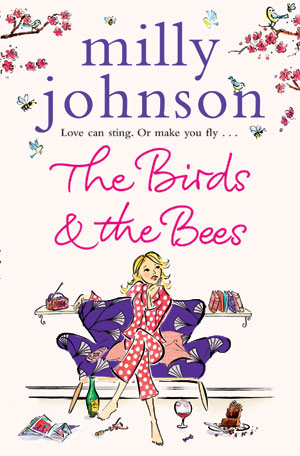 Winner of the Single Titles Reviewers Award and longlisted for the Romantic Novelist Association Book of the Year.

The Birds and the Bees is available as a paperback or ebook from Amazon.

Romance writer and single mum Stevie Honeywell has only weeks to go to her wedding when her fiance Matthew runs off with her glamorous new friend Jo MacLean.

It feels like history repeating itself for Stevie, but this time she is determined to win back her man. She isn’t going to act as he might expect. She isn’t going to wail and dig her heels in, she is simply going to pretend to let him go whilst she pursues a mad course of dieting, exercising and self-improvement.

And it feels like history is repeating itself for Adam MacLean too, who is also determined to win his lady, Jo, back with the same basic psychological tactics.

Then he is going to initiate his master plan: getting together with Stevie to drive Jo wild with jealousy.

So, like the Scottish country jig ‘The Birds and the Bees’, the couples all change partners and learn some revealing truths about each other along the way.

But what happens when Adam’s master plan actually starts to work? And just who will Stevie be dancing with when the music stops?

ABOUT THIS BOOK.
This book was a joy to write. I’ve always had to act as translator between friends and my Glaswegian clan which has given us plenty of moments of hilarity over the years, so I had great fun with Adam MacLean, who is one of my most popular heroes. And it’s the first ‘sighting’ of Jo MacLean who turns up in later books – what fun she is to write. Surprisingly I’ve had quite a few letters about her too as her modus operandi is quite a common one.  Sadly for those whose path she crosses!

The book was originally called The Bees of Bonniebride, but I was asked to change it to this simpler title, which works just fine. In other countries it became ‘Ex und Flop’ and ‘The Bees and the Bluebells’ and even ‘A Perfect Life’ and ‘True Love, False Lovers’. When I was writing it, I kept having the image of one of the dances we used to do at school where couples split and repair. I wanted to call the book after one of these country dances, preferably a Scottish one, but I couldn’t find a suitable name. So I made one up. Even now, I have the odd letter from dance groups asking me where they can find the choreography for it and more information about how to jig ‘The Birds and the Bees’.

It never sold as well as any of my other books – the second book curse! – and yet it’s one that seems to be really enjoyed by people who have taken Stevie and Adam to their hearts. It was also inspired by my little boy (now not so little) who used to suck his collars all the time and was superhero mad. We writers press our memories into our pages.

Praise for The Birds and the Bees

“It was typical Milly’s style with lots of romance, drama, beautiful described setting with a happy ending!”
– Marie’s Book Boutique

“My wife thinks I have gone soft in the head! Old age has caught up on me ( I am 86) I have read a lot crime books. She says that I am reading woman’s books ! I have started reading this type of book because I like the humour and suspense. This one of best. I will be reading more by this author. I am Scottish!
– Jack Bell, via Amazon

“A warm, tender and utterly hilarious story about love and betrayal.”
– Amazon Review