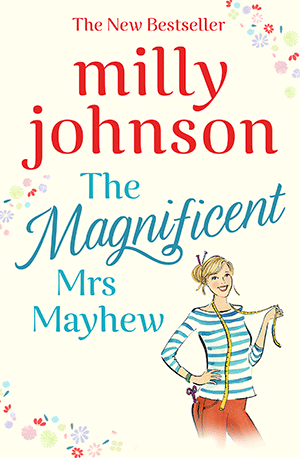 ‘Another winner! You can’t go wrong with a Milly Johnson book – and she’s done it again with Mrs Mayhew! ‘
– Amazon reader review

Out now!  Order from Amazon.

All her life, Sophie Mayhew has felt as if she were being primed to be little more than an ornamental wife – a suitable accoutrement for a powerful man, in her case John F. Mayhew, a charismatic, rich, handsome, powerful MP with his eye on the leadership.

Sophie is both admired by the press for her beauty and style and vilified for being a typical trophy wife with nothing on her agenda but to support her husband in his ambitions.  But the public have no idea what is going on behind the lovely – if unreadable – mask she presents to the world.  Not until John is embroiled in a sex scandal with an ambitious young woman in his office and Sophie is rolled out in front of the press about to read a prepared statement that she will of course be standing by her man.  But the best made plans, even when drafted by the best PR man in the business,  sometimes don’t quite turn out how they are supposed to.

Taking time out from the world, Sophie escapes to Little Loste, a small coastal town in Yorkshire where no one knows who she is and accepts her as ‘Pom’ a young French woman down on her luck who needs a break.  She is offered sanctuary by the church in the form of a dilapidated old alms house and there hopes to hide and recalibrate and heal.  She finds kindness and acceptance and friendship in abundance… plus free bread cakes, in a place that was very special to her one summer eighteen years ago.

But the clock is ticking and she accepts she cannot escape real life forever.  ‘Sophie the Trophy’ has no choice but to eventually go back to a life that seems ever-increasingly empty and unfulfilling, something that isn’t that easy when the sun, the sea, the people of a friendly little town plus a very handsome vicar and his young son seem to be making their home firmly in Sophie’s lonely heart.

What people are saying about The Magnificent Mrs Mayhew

“A warm hug of a book.”
– Sunday Express Magazine

“An uplifting read with a strong female heroine to draw you in.”
– Woman’s Weekly

“Rooted in the deep issues that shape and shake women’s lives.”
– The Lady

“Another winner! You can’t go wrong with a Milly Johnson book – and she’s done it again with Mrs Mayhew!”
– Amazon review

“Couldn’t put it down. I have loved every one of Milly Johnson’s books, this latest did not disappoint at all.”
– Amazon review

“…A warm hug of a book about self-discovery and shaking off people’s expectations, with a distractingly hot local vicar thrown in.”
– Daily Express