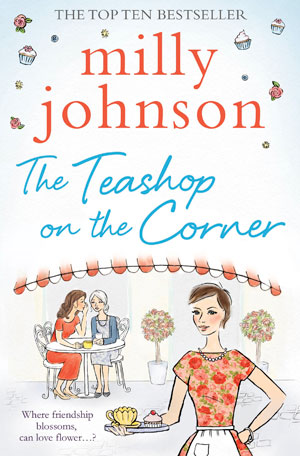 “Milly Johnson has a real gift for story telling and has once again written an absorbing and charming novel about love, loss, recovery and finally redemption.”

Shortlisted for the Romantic Comedy Award of 2015

The Teashop On The Corner is available from Amazon.

At her beloved husband’s funeral, Carla Pride discovers that Martin never divorced his first wife and has been living a double life with her. And his other wife, Julie Pride, is determined to take everything from Carla – her home, her money, and her memories.

When Will Linton’s business goes bust he at least thinks that with the support of his trophy wife Nicole he will rise to the top again. But Nicole isn’t going to stick around with ‘a loser’ and Will finds himself at rock bottom.

Molly Jones is being bullied into going into a retirement home by her ‘concerned’ daughter-in-law Sherry and son Gram. Then the love of Molly’s life walks in through her door – a man who broke Molly’s heart into little pieces many years ago. But he says he is dying and wants to spend the time he has left with her.

Young Ryan O’Gowan comes from the roughest family in the area but unlike the rest of his clan, Ryan wants to make something of his life.

Pavitar Singh is a lonely retired doctor with a great love of literature – and a thirst for like-minded company.

All very different people in need of a little love and compassion which they find by chance in the stationery and teashop on the corner run by the ever-cheerful Leni, a woman that site developer Shaun McCarthy finds annoying beyond annoying for her ability to remain unrealistically upbeat about everything. But is the world of Leni Merryman as full of rainbows and sparkles as everyone thinks? Or is her smile papering over many cracks in her heart that will soon be shattered unwittingly by her new friends?

I crammed this book full of all my favourite things – literary gifts, black cats, teashops, DDG heroes…  It came about because my father in law moaned that no-one wrote heroes called Harvey in books.  So I named my hero after him, and also wrote in my mother in law Molly, who read all my books.  This became her book.  But sadly she never got to see it because she died two days before the award ceremony where It’s Raining Men won for best romcom of the year.  I wasn’t going to go but my partner told me to ‘bring it home for my mum.’  And I did.  I’ve felt Molly’s breath behind this book for sure. I’ve never had as many letters about it and my sales figures went through the roof on this one.  And it is a very gentle story about books and afternoon tea and people who are damaged but not broken who find solace with each other.

One day I shall have this Teashop myself and fill it full of literary gifts!

Praise for The Teashop on the Corner

“Milly Johnson has always been a fantastic author who I have loved reading but I must say this book had that extra something and I couldn’t even tell you what that ‘something’ was…it was just there!”
– BCB & More

“Just this very second finished reading The Teashop on the Corner and I’m a blubbering mess! This is master storytelling full of drama, love, loss, heartache and healing.”
– Chicklit Girl

“Goes on my list of favourite books of all time.”
– Vuly