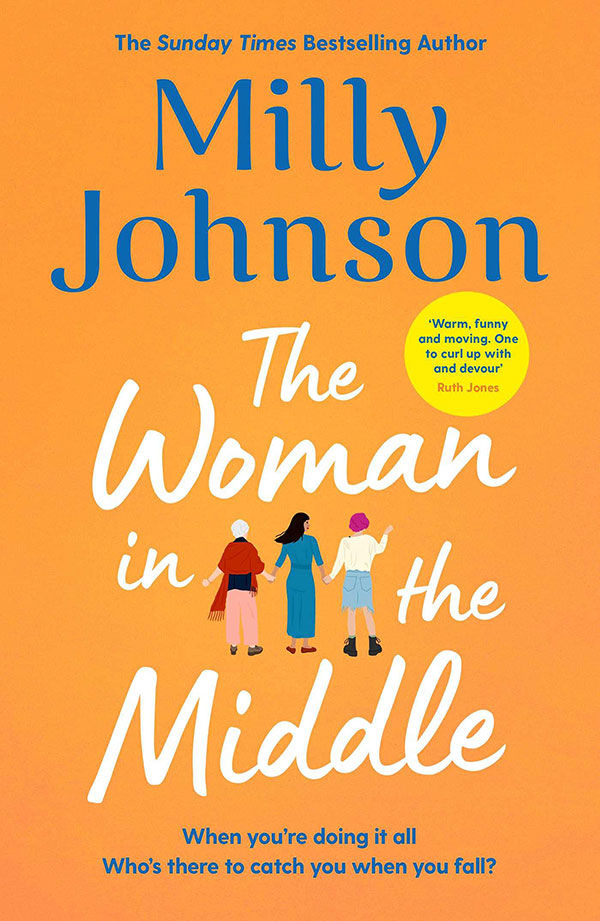 “An unputdownable tale of redemption and hard-won wisdom, this is a book that speaks for us all wherever we are in our lives. Milly Johnson always delivers an absolutely cracking read” – Katie Fforde

Shay Bastable is the woman in the middle. She is part of the sandwich generation – caring for her parents and her children, supporting her husband Bruce, holding them all together and caring for them as best she can.

Then the arrival of a large orange skip on her mother’s estate sets in motion a cataclysmic series of events which leads to the collapse of Shay’s world. She is forced to put herself first for a change.

But in order to move forward with her present, Shay needs to make sense of her past. And so she returns to the little village she grew up in, to uncover the truth about what happened to her when she was younger. And in doing so, she discovers that sometimes you have to hit rock bottom to find the only way is up.

This book was heavily influenced by my own situation as a ’sandwich woman’. It’s been hard to become the parent to your own parents, trying to do everything you can so they feel as independent as they ever were, even though the amount of scaffolding you need to supply to make that happen increases with every passing month. My diary was more full of mum and dad’s medical appointments than it was full of my own and I’ve had to learn a lot of patience which I don’t have in massive reserves. It’s totally knackering to be worrying about the generations at either side of you but now my dad has passed, I would give anything to have him back and be ferrying him everywhere, filling in his forms, making sure he ate properly. It’s duty but with love to look after those who have looked after you in their time.

The other half of the sandwich is your children, those who are adult in name but who still have a lot to learn. Ironic that you try to stop them making the mistakes you did, but only by making them themselves will they learn, smooth their rough edges smooth to become polished individuals. We pour our love into our children in the hope that when they leave us, they will fly with strong wings, but it’s hard to let them go and you will worry about them always.

I know many people out there are in the same boat, squashed between two beloved layers, spread as thin as cheap margarine, tired, self-flagellating, frustrated and I wanted to write a story about them so they recognise themselves and see how much they do because too often we only see what we haven’t managed to do. And that is the essence of my book. It’s about the love in a family, the sacrifices, the hard work entailed in being a mum and a daughter but also the joy (often more joyful in hindsight) and the power of that love when it has to stand up and be counted.

It’s also one of my darkest books so I’ve counteracted that with some of my lightest touches too because I want to give my readers a good ride with it, all the swoops and whip-neck corners and make their hearts soar at the end. I broke my own heart writing this book because it’s very close to home. Fingers crossed I’ve succeeded in what I set out to do.

Praise for The Woman in the Middle

“An unputdownable tale of redemption and hard-won wisdom, this is a book that speaks for us all wherever we are in our lives.  Milly Johnson always delivers an absolutely cracking read'”
– Katie Fforde

‘The main characters are wise, loveable and so relatable. The humour is down to earth, the emotions are real and the storyline compelling. No one else writes quite like Milly and, with The Woman in the Middle, she has produced yet another winner.’
– Jill Mansell

“Written from the heart … honest, inspirational and great fun … I loved it’.”
– Janie Millman

“This book is delicious. As moreish as a freshly made sandwich, full of your favourite filling. It’s well worth the wait and joyous to bite into.”
–  Jo Thomas

“A complex family drama with a big heart, a light touch and lots of surprises.”
– Veronica Henry

“The perfect pick-me-up that you won’t be able to put down. I loved it.
– Matt Dunn”