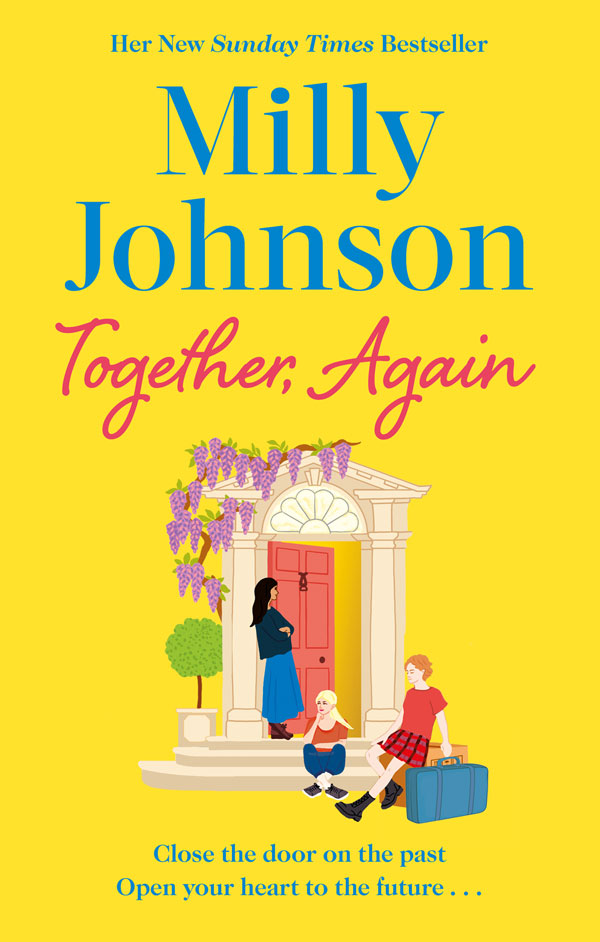 Together, Again is a novel about sister helping sister to heal from childhood scars, and of finding, in each other, the love they have all been deprived of. Together, Again is about vulnerability and strength, acceptance and family, kindness, hope and triumph over adversity.

Sisters Jolene, Marsha and Annis have convened at Fox House, their childhood home, following the death of their mother, the spiky Eleanor Vamplew. Born seven years apart, the women have never bonded and are more strangers than sisters but they must work together to arrange a funeral their mother would be proud of.

Jolene, the eldest, is a successful romantic novelist who writes templates of beautiful relationships even though her marriage to the handsome and charming Warren is complicated. She fears she has turned into her cold, emotionless mother. But has she – or has she just learned to separate herself into two in order to function?

Marsha, the neglected middle child, has put every bit of her energy into her work, hoping to earn the coveted validation from her parents who wanted a boy, not another girl. Now she is home and the man who broke her young, lonely heart has been forced back into her life. But can she finally bear to close that door and open another for a new, unexpected love?

Annis, the youngest, is the renegade, who left home aged sixteen and never returned, not even for the death of their beloved father, Julian. Until now. But why did Eleanor Vamplew recently change her will to leave everything to this daughter she has refused to mention for fifteen years, the one she considered a wretched accident?

In the three weeks between Eleanor’s death and her funeral truths are uncovered, lies are exposed… but maybe some secrets are best kept.

I have no siblings so the dynamics between them have always fascinated me. I haven’t written a story before about sisters and I wanted to explore that new territory.  This is the antithesis of ‘Woman in the Middle’ which is about the close relationship between mothers and their children plus a bit of sibling rivalry. This book is about the damage done when children are brought up without parental love and of sisters growing close once the enormous shadow of their mother has gone.

I was talking to a lady at an event about how her mother used to ‘lend her out’ to her boyfriends when she was a young girl and yet she still loved her mother, despite leaving home as soon as she could and never seeing her again. It made me realise how complex some families are, our feelings do not always fit into pigeon holes, they snag and knot. And my story is relevant to this age where appearance is all and shiny veneers cover a lot of underlying rot.

Families are not always cosy, marriages are often bumpy, some parents are rubbish at the job, some children have miserable childhoods. If you are going to write from real life, as I do, you accept that these are the realities for some people. And when a death occurs of a big family figure, there is sometimes an earthquake of sorts as forced reverence conflicts with resentful feelings.

This is a fucked-up family par excellence, they are square pegs that have never found their round holes. Is it too late to reverse the damage? Don’t expect me to shy away from what happens out there in the cold, hard world.

In saying that, I hope you love the blossoming of my women, their growing love, support and understanding for each other and the power of kindness, because there is a lot of that in this book. And how the skill of reading is a fundamental skill much underappreciated.

As ever, when I tackle a heavy subject, I counterbalance it with a light hand where appropriate and I hope you enjoy the wonderful men in my story, and rejoice at my girls strengthening and also their softening.

Praise for The Woman in the Middle

“An unputdownable tale of redemption and hard-won wisdom, this is a book that speaks for us all wherever we are in our lives.  Milly Johnson always delivers an absolutely cracking read'”
– Katie Fforde

‘The main characters are wise, loveable and so relatable. The humour is down to earth, the emotions are real and the storyline compelling. No one else writes quite like Milly and, with The Woman in the Middle, she has produced yet another winner.’
– Jill Mansell

“Written from the heart … honest, inspirational and great fun … I loved it’.”
– Janie Millman

“This book is delicious. As moreish as a freshly made sandwich, full of your favourite filling. It’s well worth the wait and joyous to bite into.”
–  Jo Thomas

“A complex family drama with a big heart, a light touch and lots of surprises.”
– Veronica Henry

“The perfect pick-me-up that you won’t be able to put down. I loved it.
– Matt Dunn”